by Jennifer Churchill, 2012 An example of how a family can hang by a thread has come to the fore through the talented five-year-old mare Hurtle Myrtle, the daughter of Dane Shadow who fulfilled her great promise at the recent … Continue reading →

Hobartville enjoyed a great start to the Spring Carnival with 3 individual winners on Saturday 1st September 2012 at their local Hawkesbury track. All three were trained in house by Garry White. East Village kicked off they day well with … Continue reading →

An example of how a family can hang by a thread has come to the fore through the talented five-year-old mare Hurtle Myrtle, the daughter of Dane Shadow who fulfilled her great promise at the recent Victorian carnival with her big victory in the Group I VRC Empire Rose Stakes.

The win brought the five-year-old mare’s earnings to $753,700, from three previous wins that also included the ATC Sapphire Stakes-Gr.2 and BRC Dane Ripper Stakes-Gr.2.  A consistent performer throughout her career, she has also been placed in the AJC Flight Stakes-Gr.1., as well four other Group races. END_OF_DOCUMENT_TOKEN_TO_BE_REPLACED 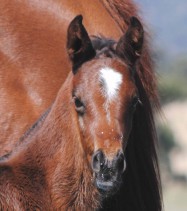 Top class mare Hurtle Myrtle hit the headlines earlier this year when selling for $1million at the 2012 Magic Millions National Broodmare Sale and sported the colours of her new owners Segenhoe Thoroughbreds when winning a barrier trial at Randwick on Monday morning.

Still being trained by Matthew Smith, who has guided the daughter of Dane Shadow to many wins including the Group I VRC Myer Classic, Hurtle Myrtle indicated there may be more in store when cruising clear to win her 1050 metre trial by two and a half lengths.

Given the overwhelming success of Hurtle Myrtle, her dam Ravenswood was upgraded last year by her owner Grahame Mapp of Hobartville Stud to be covered by champion sire Redoute’s Choice .

She produced this gorgeous colt at Kitchwin Hills last week. 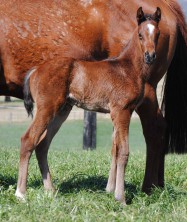 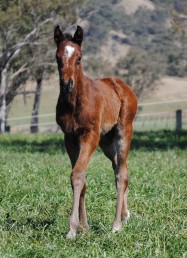 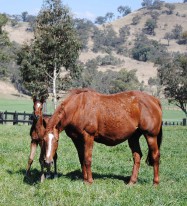 Hobartville enjoyed a great start to the Spring Carnival with 3 individual winners on Saturday 1st September 2012 at their local Hawkesbury track. All three were trained in house by Garry White. East Village kicked off they day well with a convincing win in Race 1 following a strong last start performance. She is the progeny of another Hobartville stallion – Global Crossing – and is showing good promise. Race 3 saw Boardwalk score having stepped up to 2000m. He is another first time winner for Dane Shadow

Kitchwin Hill’s Dane Shadow (pictured) heads the list of most profitable stallions at the 2012 Easter Yearling Sales achieving an average $194,000 off a $16,500 fee and is the classic example of a sire on an upward swing that rewarded punters for jumping on board.

Just another well bred son of Danehill (USA) when he started off at a fee of $12,100 in 2005, before covering at $7,700 for the next three seasons, these yearlings are his first conceived after he started going well and had his fee raised to a more commercial level.

The following table makes interesting reading for those looking for the best return on their breeding investment for 2012.

An $810,000 Inglis Easter purchase from the draft of Kitchwin Hills, stylish near black colt Ashokan was the most expensive yearling by his sire sold in 2011 and is now headed for the Group I ATC Golden Slipper after scoring a determined victory in the Group III ATC Skyline Stakes at Randwick on Saturday.

Having his second start following an encouraging debut second at Rosehill last month, the John O’Shea trained colt was fitted with blinkers for his first crack at Black Type and the decision proved a winning move.

Ashokan jumped well and travelled forward for Jim Cassidy to sit outside the leader and despite racing a bit keenly, found plenty in the run home to defeat the previously unbeaten race favourite Raceway by three quarters of a length.

“He showed every indication at home that he would be competitive today,” said O’Shea.

“He’s still learning, but he was strong to the line.”

Winning rider Jim Cassidy was also aboard the colt when he made his debut and was quick to note the improvement.

“He’s gone from cheese to chalk, the blinkers have really switched him on,” he said.

“We did plenty of work early in the race, but when they got to the furlong he really dug deep and showed his class.”

Ashokan was purchased by bloodstock agent James Harron on behalf of well known Sydney owners Dr and Mrs Edmund Bateman, who also have star colt Foxwedge in work with O’Shea.

“It’s a great result for the Batemans and if we can keep him together for the next three weeks and get him to the Slipper it will be three years in a row that they have had a runner,” O’Shea pointed out.

Last year the Bateman owned Foxwedge and Satin Shoes contested the Golden Slipper finishing seventh and ninth respectively, while the previous year they had Georgette Silk, who also finished out of a place.

Ashokan represents their third roll of the dice at the world’s richest juvenile race and he’s certainly bred to be there on Slipper Day.

His dam November Flight has a filly by Shamardal (USA) last spring and is back in foal to More Than Ready (USA), while her current yearling, a colt by Red Ransom (USA) will be offered by Kitchwin Hills as Lot 304 at the 2012 Inglis Australian Easter Yearling Sale.

It was another soft market at the 2012 Magic Millions Yearling Sales. The stand out yearlings went well but there were plenty of vendors taking horses home.

Hobartville had an “exclusive” offering this year with one colt going through with the Kitchwin Hills draft. A lovely athletic type by Dane Shadow and out of our well credentialed Zabeel mare, Sherborne Abbey. She is the dam of two to race for two winners, her daughter – Miss Ipanema – was recently 4th in the Championships Stakes Group 2.

Our guy had been popular with several vendors and we were very pleased to see him purchased by Guy Walter who we know he will give the horse every chance to succeed.

Hurtle Myrtle’s strong win in the $500,000 Myer Classic (1600m) at Flemington on Saturday saw this 5-year-old mare from the first crop of the Kitchwin Hills stud’s Danehill sire Dane Shadow added to the long list of Group 1 winners produced by one of Australia’s longest established active horse studs.

Now owned by Sydney businessman Grahame Mapp and under the management of Hawkesbury trainer Garry White, it is the Hobartville Stud and it is on the fringe of the Hawkesbury River serviced town of Richmond.

Since Hobartville was settled in1828 by William Cox Jnr, a son of the man who constructed the first road over the Blue Mountains and who is ancestor of Magic Millions Sales Company managing director Vin Cox, it has had numerous owners and produced hundreds of horses, and top stud cattle. In the mid to late 1800s, Hobartville was owned by Andrew Town, the biggest horse owner in Australia for a time. He had a number of good sires in use, including Maribyrnong, one the greatest colonial sires, another very good local winner getter in1880 Melbourne Cup winner Grand Flaneur and the champion sire Trenton.The latter did his first season at Hobartville and then moved to Victoria.

Grand Flaneur sired the Melbourne Cup winners Bravo (dam by Maribyrnong) and Patron. Possibly it is only coincidental, but Maribyrnong was bred in Victoria by a major player in early Australian breeding Hurtle Fisher. Hurtle now joins with Myrtle to provide the name of the latest Group1 winner to come off Hobartville.

There have been few more Hobartville saturated products than Hurtle Myrtle as her sire, Dane Shadow, and her first two dams, Ravenswood (a good Sydney sprinter by the Mr. Prospector sire Woodman) and Winds of Peace (Bletchingly placegetter), were all bred by Grahame Mapp and reared on the property. The success of Hurtle Myrtle continued that which Mapp has enjoyed in Hobartville ownership in the past quarter century. It is a success that boomed off to a big start when he bred Winds of Peace’s brother Star Watch, the champion 2-year-old of 1988, the year he won four races in Sydney, including the Golden Slipper, Skyline Stakes and Kindergarten Stakes.

Raced by the Inghams and trainer Tommy Smith and competed eleven times all told, Star Watch at three won the AJC Up and Coming Stakes, finished second in the VRC Ascot Vale Stakes and third in the Moonee Valley Stakes. Amazingly, the bottom line of the pedigrees of Hurtle Myrtle and Star Watch runs back to Gaillardia, a Trenton mare bred on Hobartville by Andrew Towns. She was from a sister to Grand Flaneur, a winner, besides the Melbourne Cup, of both the VRC and AJC Derbys.

The win on Saturday by Hurtle Myrtle was well deserved as she had been on the threshold of Group1 success on several occasions. Her 19 starts also include wins in two Group 2s, the Dane Ripper Stakes (Brisbane) and Sapphire Stakes (Sydney), three Group 2 seconds and a Group1 third (the Flight Stakes) in Sydney. She was a handy fifth of 17 in the Group 1 Coolmore at Rosehill Gardens.

Raced by nine owners out of the Matthew Smith stables at Warwick Farm, Hurtle Myrtle was sold for Hobartville by Kitchwin Hills for $55,000 at the 2008 Inglis Classic yearling sale in Sydney. She is the third Group1 winner for Dane Shadow, sharing this distinction with Shellscrape, an AJC Galaxy winner now looking after his first book of mares at the newly established Wattle Grove stud at Berrima, NSW, and Shadows In The Sun, a South Australian Derby winner. Like Hurtle Myrtle, Shadows In The Sun was bred by Hobartville.

The foundation sire at the Kitchwin Hills stud, one located near the junction of the Pages and Isis rivers in the Upper Hunter, Dane Shadow was a smart racehorse whose12 outings secured six stakes cheques in Sydney, a win in the Ming Dynasty, seconds in the Up and Coming, Silver Slipper and Todman Slipper Trial, a third in the Missile Stakes and fourth in the George Main.

Dane Shadow stands at Kitchwin Hills with 2010 retired Duporth, a Red Ransom Co-Champion 3YO Sprinter of 2008-09.